Interesting Perspective on the Size of Africa

HAPPY 2009! Thank you for sharing your views in 2008; may 2009 bring some progress across the many issues in the Motherland.

Thanks for sharing this Kome! 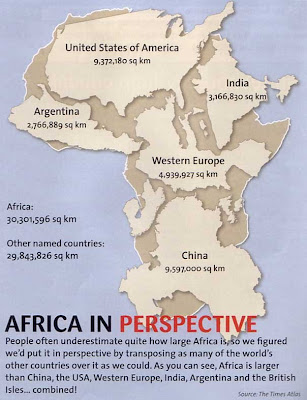 Africa's size in relation to the World Map has for ages been downsized - it is actually longer and wider than the shape that we are accustomed to seeing on the Atlas as displayed today.

The reason is that this view was first drawn up in the age of Imperialism (the British Empire, to be exact), when the emphasis was on accentuating the centre of Empire to the detriment of "the Provinces" or Colonies.

And the reason it has not changed is the widespread embarrassment and shame it would bring upon Europe and the Western nations as a whole, not to mention the suspicion that a lot of scientific "facts" are actually prejudices dressed up to appear factual.

Fela: "Africa is Centre of the World, check your World Map and see where the intersection of zero degrees latitude and zero degrees longitude are nearest to".

I didn't even know it.

In my head and around me said...

I saw this some time ago and was pleasantly suprised. But then wondered why pleasantly so. We have proven that size does not necessarily mean intelligence or power.

Africa my Africa..is this your back that is bent?

And yet, the continent allows its fate to be determined by the whims of those whose entire national boundaries would be swallowed within our territory.

Let's get it together!

Misan, where's that why I blog about Africa meme?

@solo,
are u blaming "others" for africa's stagnation?

...sad, huh...to think of all the potential in africa being exploited by others or just wasted...

@ Sherri: which "others"? The reality is that far too often Africa is 'begging' for mosquito nets, 'begging' for medication, 'begging' for aid etc. We don't take enough of these matters into our own hands. Our leaders, and we the people by implication, outsource our problems and have made everyone drunkingly rich of our problems.

Why, my sister, would I then blame 'others' for doing what any normal person would do by taking advantage? If we allow others to determine our fate, then so it shall be. But, until we as a people realize that by pulling our bootstraps we can truly begin to better ourselves, then the might continent will remain bowed.

Abeg, read my response carefully and place it in the context of all that I have previously said (very publicly) before accusing me, oh! This one that you are posing questions at me as if say na fight. lol!

Wow. I've seen dissertations on the imperialistic nature of the map itself and what not...but this picture put those thousand words in perspective!

this picture is fail. completely out of proportion. I don't know about the numbers, but the map is wrong. argentina is, at least, 6 times smaller than usa. out of that, I do agree with the political propose.