ANOTHER BARACK IN THE MAKING?

A thousand apologies for the radio silence. There has been a cross atlantic move to the UK (good to be back, though i miss NY terribly!) and a homecoming visit to Lagos & Accra in between. Wanted to blog about the motherland, our resilience in the face of (seemingly) neverending frustration and our constant settling for less ("wetin man go do" attitude); then wanted to vent about Mugabe and what African leaders can do to get him out; and finally wanted to take stock (no pun intended) of the Nigerian stock market's current trajectory... but as you can see, June 2008 has come and gone without activity. However, thanks to the guest post below from Nigerian Curiosity (Thanks a bunch Solo!), tAB is back! Good to see that Nigerians around the world are aspiring to great heights. As Dan Hoyle would say, Tings Dey Happen!

ANOTHER BARACK IN THE MAKING - NIGERIAN CURIOSITY

By now, many of us are aware that Barack Obama is the presumed Democratic nominee and will become the first African American to run for President under a major American political party. Congratulations to him. But, now, the battle for the White House against John McCain actually begins. Given what he went through to clinch the nomination, he should be battle hardened and ready for everything the Republican Party will throw at him. And, believe me, when I say 'everything', I mean everything including the kitchen sink!

Considering the giddiness I feel at knowing that the Democratic nomination process is finally over, I got even more excited to learn recently that there is potentially another 'Obama' in the making in Kansas. His name is K.C. Ohaebosim and he is seeking a State Senate seat in Kansas' 29th District. K.C. is running on the Democratic ticket and is currently leading his opponent by 5 points in the latest poll (as of June 6th).

Oh, did I mention that he has ties to Nigeria? His first name is Kelechi which in Igbo means "Thank God" and his father is Dr. Linus Ohaebosim, a respected doctor in Kansas. Kelechi, or K.C. is only 29 and if he wins his seat, he would be one of the youngest, if not the youngest State Senator in the history of Kansas. He would also be the first individual of Nigerian heritage to hold such an office.

Here is an excerpt from his campaign website - www.kcforkansas.com 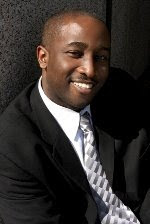 "K.C. values hard work by giving well more than is expected, and sees honesty as the key to unlock the doors of communication in any relationship. He believes that the best leader must be a better servant and is convinced that even those who are silent, still have a voice. K.C. desires to listen, to even the quietest voices, learn from those who have blazed trails well before him and effectively lead those who will follow."
Politics is not for the faint hearted, and for this man to seek a State Senate seat this early in life is respectable and quite encouraging. K.C. is a Nigerian America who all Nigerians and Americans should be proud of - a young man who is committed to improving the lots of others.

Could K.C. be another Barack Obama in the making? Only time will tell. But it will do us all a lot of good to watch this young politician who has a bright future ahead of him. Or better yet, you can encourage those you know to contribute to his campaign and vote for him come election day.
Posted by TheAfroBeat at 6/29/2008 10:23:00 PM 5 comments: